Do you know the history of our Lofthouse site?

Lofthouse is mentioned in Domesday as Loftose or Locthuse under lands of Ilbert of Lacey, having woodland and a mill. Lofthouse Gate is referred to in 1771 and Lofthouse Yate in 1709. The name Lofthouse derives from the Old Norse Lopt-hus meaning a house with a loft or upper chamber.

Evidence suggests the historic core of Lofthouse was centred round the crossroads about 1.5km to the north of Park View, while Lofthouse Gate grew up at the crossing over the Lingwell Gate/Lee Moor Beck.

Hopkinson’s House stands mid-way between the two on the Leeds Road, at Lofthouse Hill, and is a house dating to the 17th century, but partly refashioned in c.1700 for William Hopkinson and has undergone a number of 20thcentury additions.

It is highly likely that the embankment defining the eastern boundary of our the site is the remnant  of another  short lived  tram road that connected the northern tram road between Robin Hood Colliery and Cringleworth running to Stanley Ferry.

According to  the  cartographic  evidence,  the connection was built after 1854  but already disused by 1894 due to the  opening  of the East & West Yorkshire Union Railway  in 1891 which  usurped the  local  tram  roads  and thence the connection to canal/river transport.

By this time, the site and surrounding area had been developed into a formal parkland, belonging to Lofthouse House, marked on the 1st Edition OS map, which became known as Lofthouse Park. In 1908 this  then  became  the  site  of  Britain’s  first  ‘Amusement  Park’, West Riding Electric Tramway Company, boasting a pavilion, haunted house, roller-skating rink and an aerodrome operating from 1913.

The park was used briefly at the beginning of World War I as a POW camp closed fully in 1918, though, along with the aerodrome, it is shown to the north of the site on the 1921 OS map.  It  was  gone  by  1930,  around  which  time  the  Lofthouse Brick Works  opened  on   the development site and is shown on the 1933 OS map, featuring a pit and works buildings. The buildings and pit are also visible in  the  background of a photograph of Lofthouse Gate Brickworks. 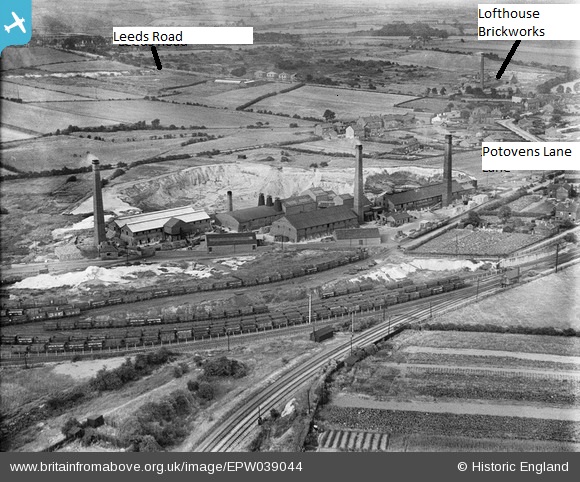 The OS 1952-59 mapping shows the pit has now extended north and east and the extension continues north over the next two decades of the pit’s use. The pits were redundant by the early 1980s and the site is now occupied by the later 20th century office development of Peter Duffy Ltd.